Ravenscourt Park: Its Trees, Their Maintenance and Planting

Ravenscourt Park is located in west London, in the borough of Hammersmith and Fulham.

It has an ancient history. Its origins date back to the medieval estate of Palingswick Manor in the 12th century.

It wasn’t until May 1888 that it was established as a public park. London County Council oversaw its management. Since 1971, it has been managed by the London Borough of Hammersmith.

Ravenscourt Park has fantastic tree diversity. There are 53 genera of tree inside with 104 different species. In total, there are 690 trees!

Notable Trees in Ravenscourt Park – The Great Trees of London

The Great Storm of 1987 occurred overnight on the 15th and 16th of October 1987. It was an extratropical cyclone with hurricane force winds. Overall, 22 people died in France and England.

Not only was this storm catastrophic in terms of loss of life, but it was also catastrophic for trees across the U.K. There were an estimated 15 million fallen trees. 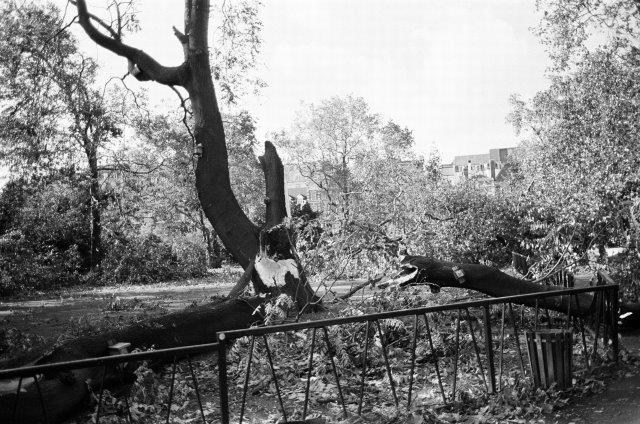 After this storm, the charity Cities For Trees created a list called the Great Trees of London. Initially, they chose 41 trees.

In 2008, they added twenty more to the Great Trees of London list. Each tree has a plaque declaring its “Great Tree” status.

GraftinGardeners also wrote an article detailing The Greatest Trees in London so check that out for more information.

The Great Trees of London in Ravenscourt Park

The south of Ravenscourt Park is home to a one-hundred-year-old plane tree (possibly Planatus orientalis) that has misshapen branches and an overgrown trunk.

The trunk’s diameter measures over two metres. People believe that this tree dates from 1812 when the park belonged to George Scott. Scott was the builder of St Peter’s Square, which is close by.

According to a Ravenscourt Park keeper, this strange looking “fat” tree was the victim of a bombing during World War II. Apparently, a bomb fell directly on top of the tree.

Although presumed dead, branches began to grow out of the trunk to form its strange shape. Many believed this regrowth to be a symbol of hope after the war. 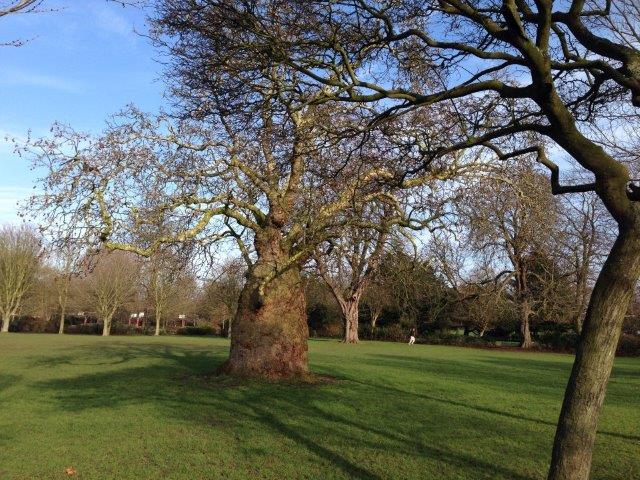 The other tree in Ravenscourt Park that makes the Great Trees of London list is the “tree of heaven” (Ailanthus altissima).

This is one of the largest of its kind in the U.K. This species of tree produces a male flower that has a rather unpleasant smell.

Apparently, the smell is like worn socks and rancid peanuts! Its name in Chinese is even Chouchun, which means ‘foul smelling tree’. It is the tallest tree of its kind in the country.

In fact, many places don’t consider “the tree of heaven” to be a tree at all but rather a noxious weed. This “tree of heaven” is near to the children’s playground in Ravenscourt Park.

If you stand at this tree, you can see the London Plane in the distance! 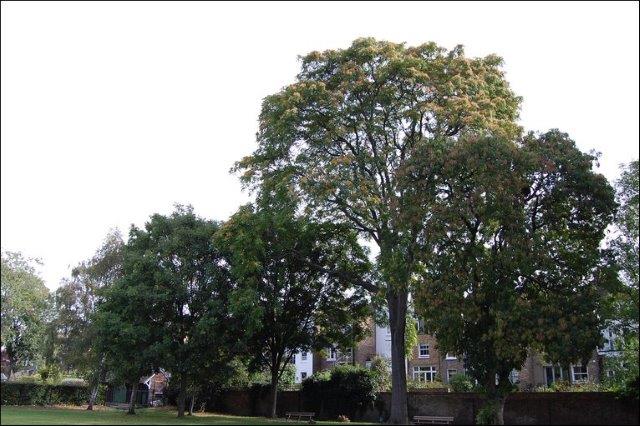 The Great Storm of 1987 is not the only time tree safety has been a problem in Ravenscourt Park. 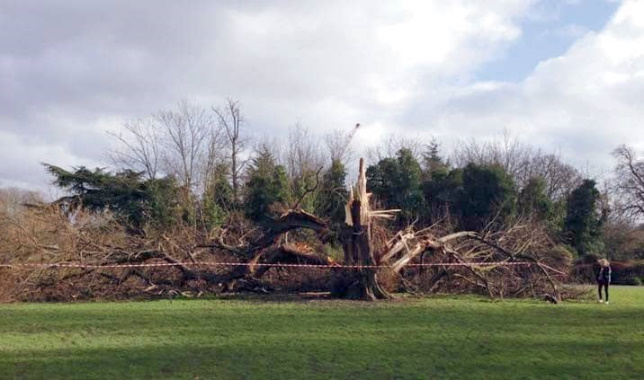 More recently, a violent thunderstorm in January 2014 devastated a huge lime tree on the west side of the lake. A lightning strike was to blame!

Other Notable Trees in Ravenscourt Park

Ravenscourt Park is home to some ancient limes (Tilia spp) as well as horse chestnuts (Aesculus hippocastanum) to the north and some tall planes in the middle.

Additionally, there are some remains of an avenue of wild cherry trees (Prunus aviumi) running in a north-south line. 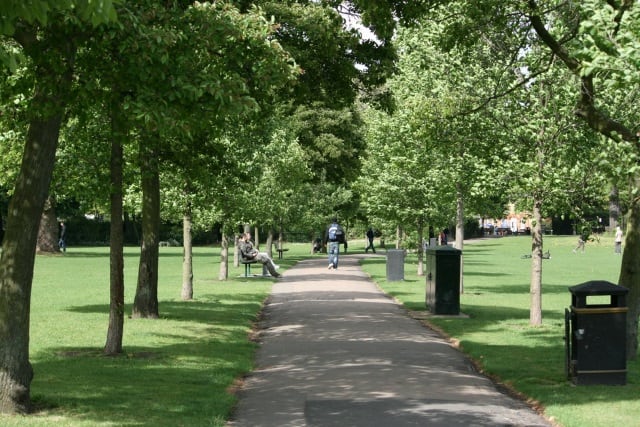 These were planted in the 1920s after many elms were eradicated by Dutch elm disease. Since the cherries are declining, there are now avenues of sweet chestnut (Castanea sativa) next to them.

In terms of recent tree planting, if you look south-west to north-east, diagonally across the park, you will see an avenue of young elm trees (Ulmus ‘New Horizon’).

This species of tree is Dutch elm disease resistant. It is a hybrid tree that came about by crossing a Japanese elm (Ulmus davidiana var. japonica) with a Siberian elm (Ulmus pumila). 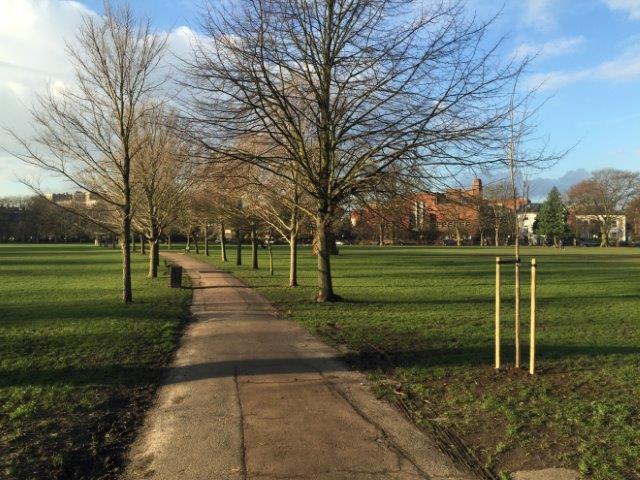 The park also comprises of many semi-wooded areas, including the lake’s island. This contains a great variety of species that are native.

There is a selection of English oak (Quercus robur) too. These were a replacement for the horse chestnuts that had decayed near Paddenswick Road.

Hammersmith and Fulham have a few parks that it manages and many of them have large trees that date back 150 years, including in this park.

There are tree specialists (arborists) who work as arboriculture managers that maintain the trees in Ravenscourt Park.

They carry out regular tree pruning in order to prevent any tree safety issues and are also on hand should a tree emergency occur.

The experts carry out a pruning schedule every three to four years but sometimes it is necessary to prune larger trees more frequently. 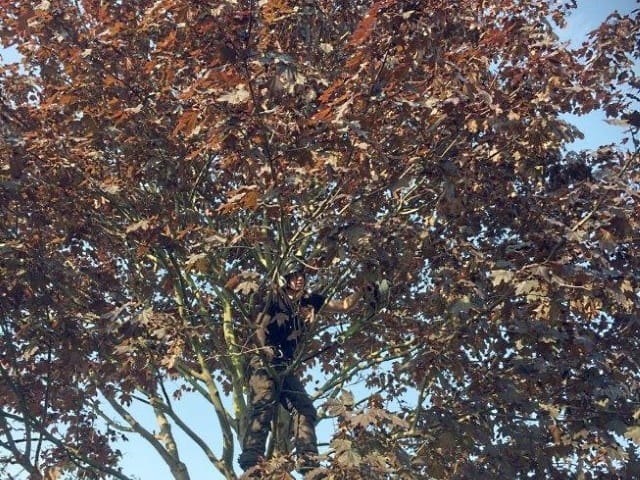 Occasionally, they are called in to carry out other work like dangerous or fallen tree removals.

The tree specialists know that the trees are an important feature in the park and so they don’t carry out any work that is unnecessary or that might be detrimental to a tree’s health in the future.

Trees, therefore, are only removed if they are dangerous, diseased or already dead.

The good news is, though, that these trees are always a priority for replacement during new tree planting and when planting services occur in the park.

Without doubt, children love nature and trees and with Ravenscourt Park’s abundance of trees, families can have a really great day out here.

What’s more, the park has lots of great features including 5 play areas for varying ages, a paddling pool and a sandpit. 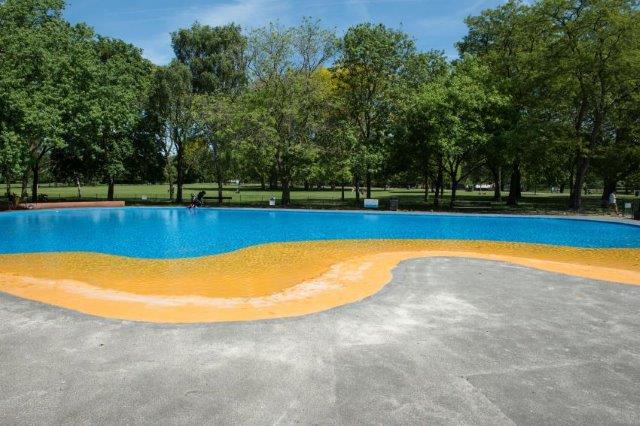 For those into sports, Ravenscourt Park has tennis courts, a football pitch with Astroturf, netball courts and a bowling green.

Finally, if you’re inspired by the beautiful trees in the park, Ravenscourt Park also has a garden centre so you can enjoy a bit of tree planting, shrub planting or tree pruning at home too!