Often referred to as just ‘Green Park’, The Green Park in London is a quiet space right in the heart of the city. It offers a peaceful environment away from the hustle and bustle of central London while still being in central London, right next to Buckingham Palace in fact! 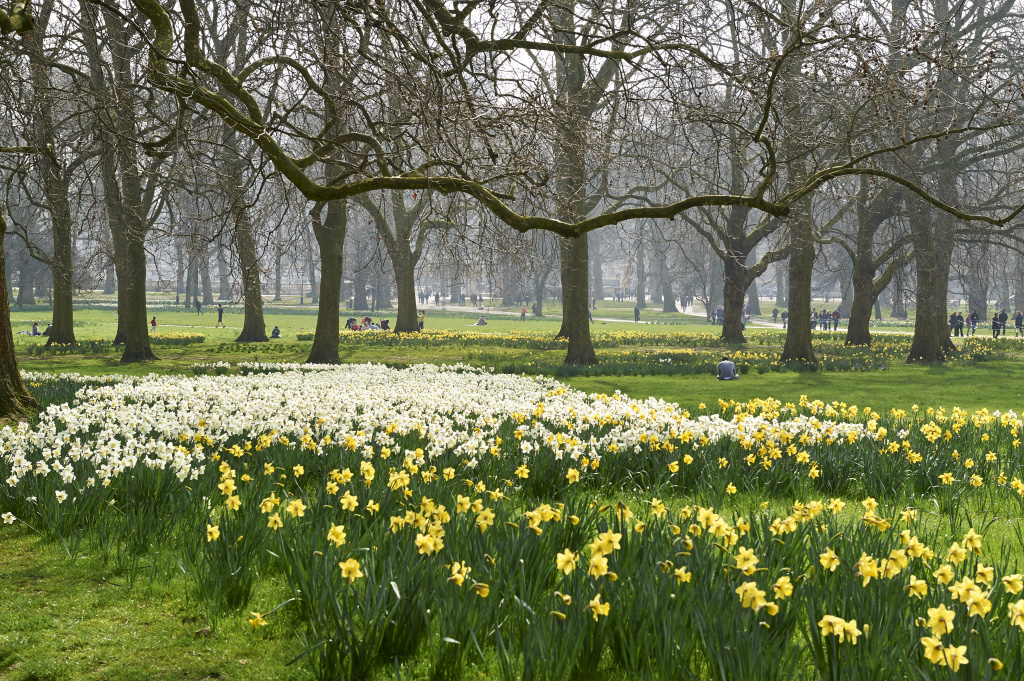 Green Park is a 40-acre site located between St. James’s Park and Hyde Park. It is, however, very different from its neighbouring parks in that it has no buildings, no open water, no children’s playgrounds and very few flowers.  There are, however, three monuments in the park that are significant. These are Phillip Jackson’s RAF Bomber Command Memorial, Estcourt J Clack’s Diane of the Treetops Fountain and Pierre Granche’s Canada Memorial.

In terms of its main characteristics, therefore, it is a grassy park with mature trees.

Location-wise, to the south, you will find Constitution Hill and to the North is Piccadilly. Green Park is a major underground and interchange station and is serviced by the Jubilee, Victoria and Piccadilly lines.

The History of The Green Park 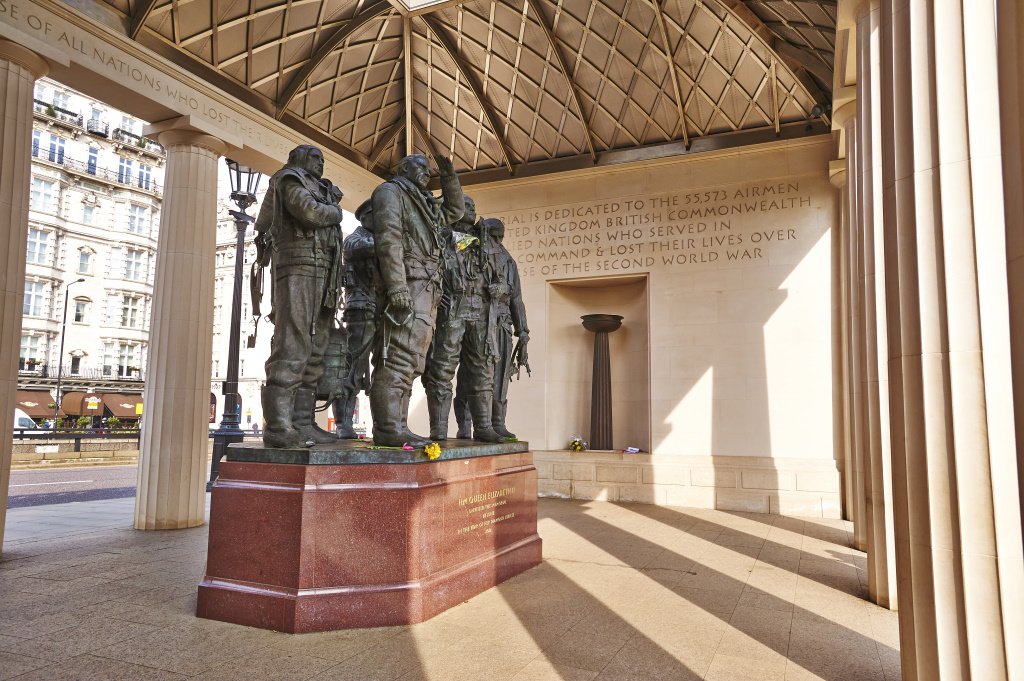 It is said that the park was originally a burial ground for leprosy patients coming from St James’s hospital. In the 16th century, it was enclosed for the first time and became part of the Poulteney family’s estate. However, in 1668, some of this area was given up to Charles II who renamed it Upper St James’s Park and build a brick wall surrounding it. He even constructed an ice house in the park to provide a place for him to keep his drinks cool in the summer months!

Well into 1700s, Green Park was actually on the periphery of London and was pretty isolated. It was known to be a stomping grown for thieves and highwaymen! The park was landscaped in 1820 by John Nash and has remained pretty similar ever since.

Why ‘The Green Park’? 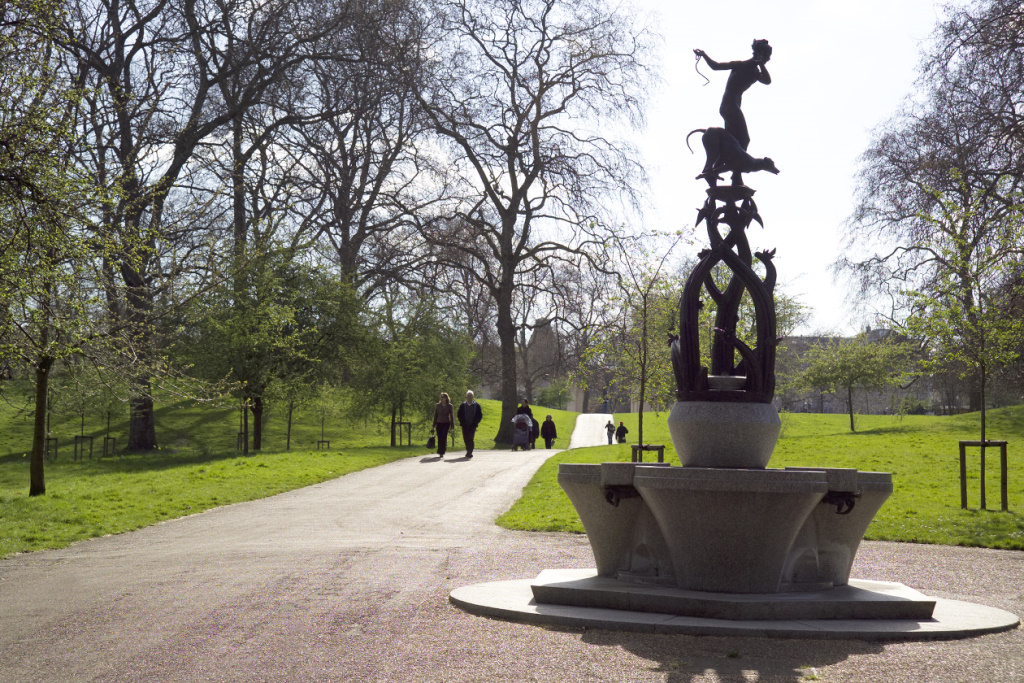 Most people believe Green Park to be named as such because there are no flowers growing there. Some people even believe that there is a reason for the lack of flowers: apparently, Charles II was caught picking flowers by his wife, only they were for his mistress and not her so she ordered for all of the flowers to be pulled out.

However, there are still flowers there! In fact, there are over 200,000 daffodils that come each spring and there are other types of flourishing blooms too. Green Park doesn’t have the formal flower arrangements like all of the other Royal Parks though.

In all likelihood, the park probably developed its name from the fact that it first became a park as an add-on to St James’s Park. At this time, it was a large open meadow that had no flowers and very few trees. It was in 1746 that the park was officially named The Green Park. 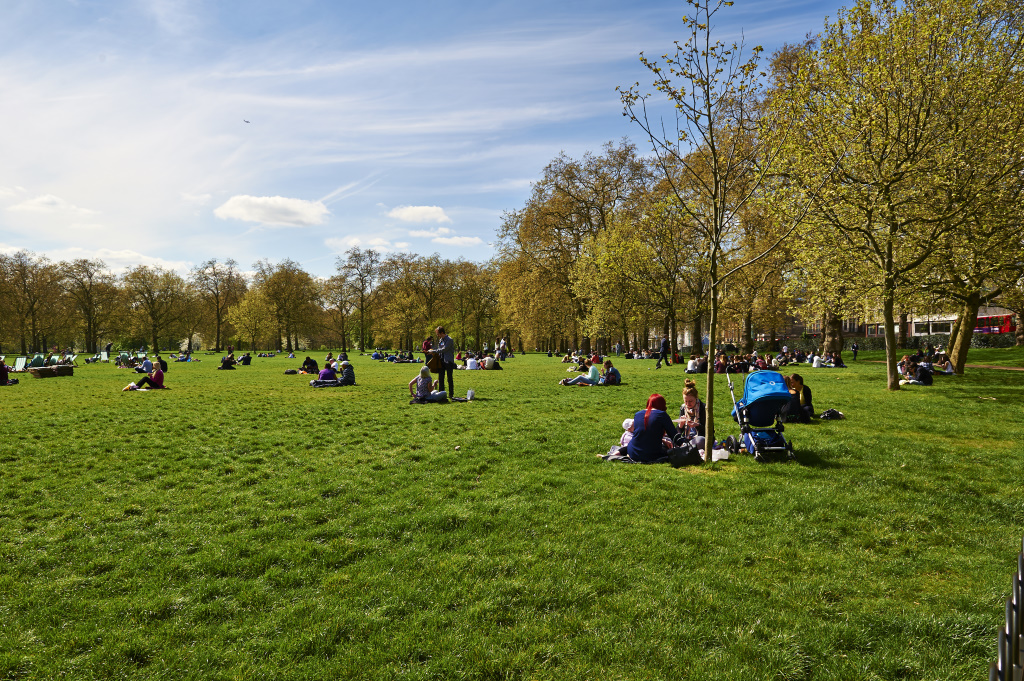 As previously mentioned, Green Park has no lakes or open water, which sets it aside from the other royal parks. It is,  however, home to Tyburn stream, although you won’t see it as it runs underneath the park flowing from Hampstead down to the Thames. It comes into the parkland from the direction of Mayfair and exists to the west passing underneath Buckingham Palace. If you want to know where it flows, the Broadwalk follows its path more or less.

Trees in The Green Park 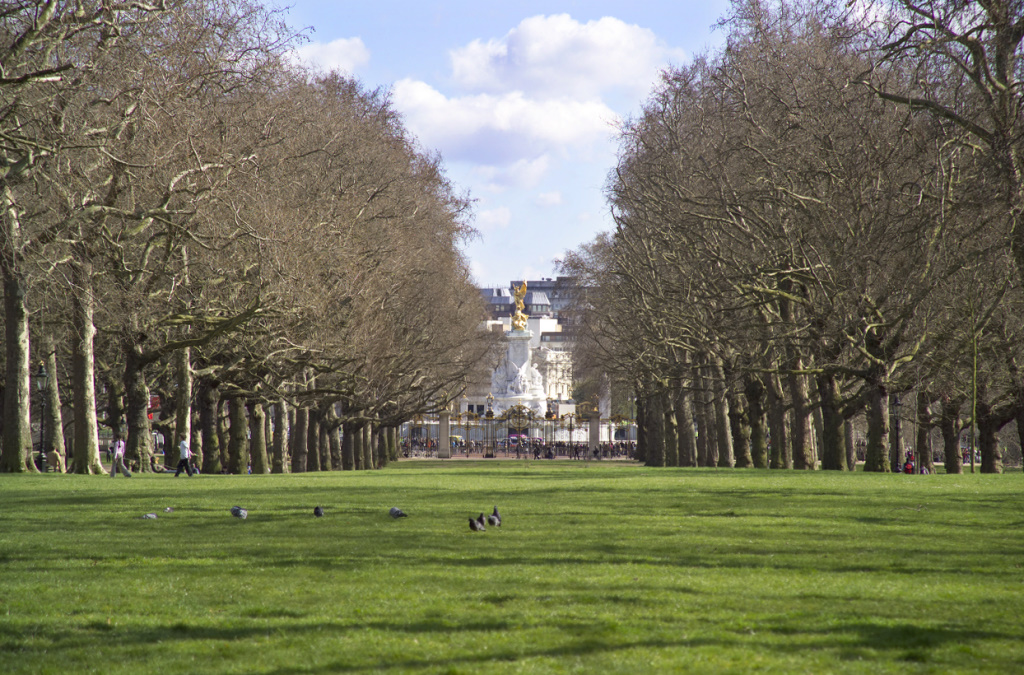 There are lots of mature trees in Green Park and these are mainly plane trees and there are some lime, hawthorn and chestnut too. Trees in Green Park benefit the surrounding areas massively as they provide a cooler microclimate for the hot summer weather and they also absorb vehicle emissions, filtering harmful pollutants and improving the air quality.

As well as the vast numbers of plane trees, there are also some unusual trees here. There are silver limes here. These trees are identifiable by their leaves as they are silver/white underneath. There are also silver maples, which can be identified by their silvery, finely cut leaves. It is also home to the rarest native timber tree species in Britain: the black poplar. The black poplar can be identified from its gnarled trunk. Finally, Green Park has some native oak trees. The hawthorns here are also a great benefit to the fauna in the park as their blossom provides rich nectar for insects during spring and their berries are a good food source for birds in autumn.

In total, there are around 620 trees in The Green Park. 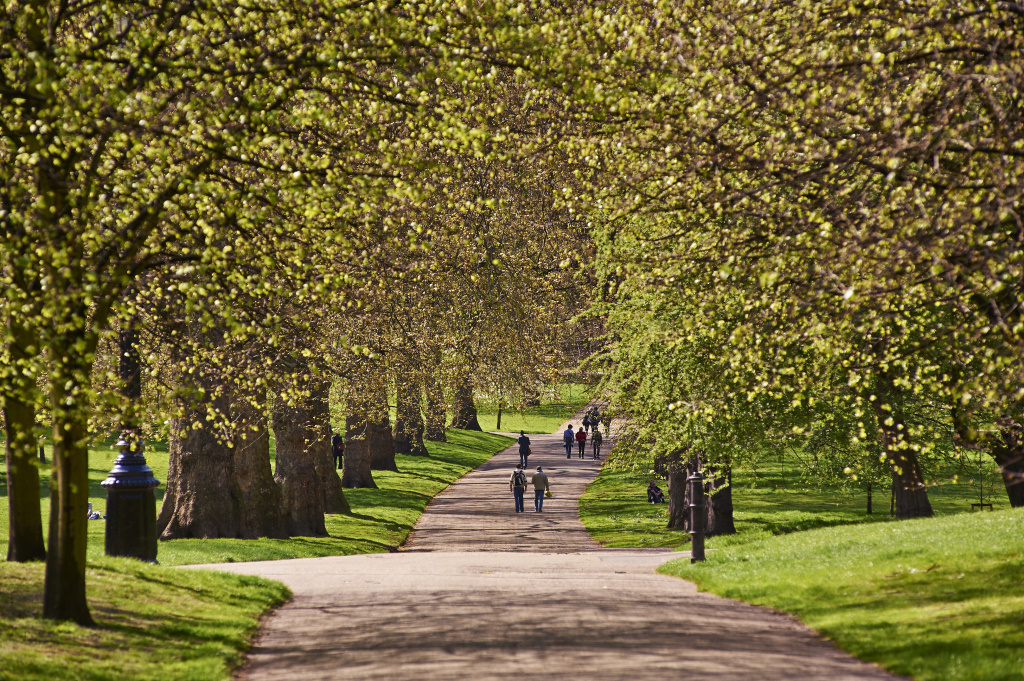 There are some maintenance works going on in Green Park at the moment. The wall, hedgerow and railings are all being replaced from the entrance to the tube right up to the memorial for the RAF Bomber Command. This is part of the Westminster Ceremonial Streetscape Project, which the Metropolitan Police Service are leading. The idea is that the temporary security barriers in the park will be made into protection measures that blend into Westminster without distracting from the historical aspect of the area.

The maintenance here will probably take many months to complete but it won’t have any impact on the footpaths or gates during the improvement time. The replacement hedge will be holly.

So that there is minimal disruption to wildlife and park visitors, the work will be completed in sections of 100 metres. Furthermore, there will be no work carried out on hedgerows when bird nesting season is underway.

What can you do there? 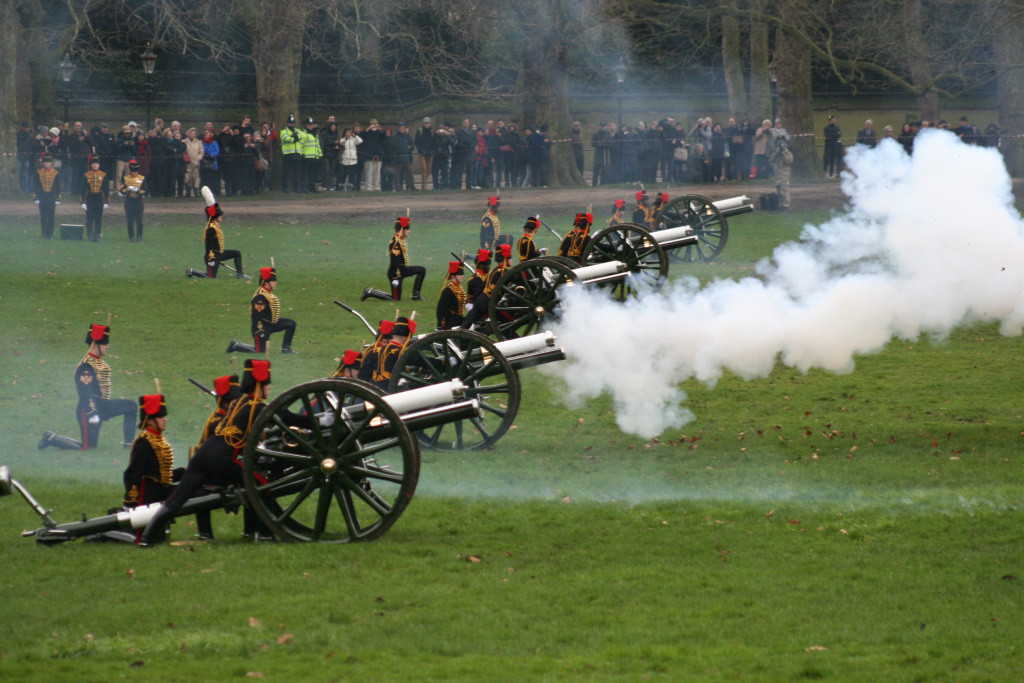 As well as enjoying the greenery that Green Park provides, in summer, like in most Royal Parks, you can hire deckchairs for a small fee. You can hire these by the hour, for a day or you can even get a season pass. The deckchairs appear in March and remain in place until October so whether it’s a peaceful lunch break out of the office or a picnic with the kids, there’s a lot to enjoy in Green Park.